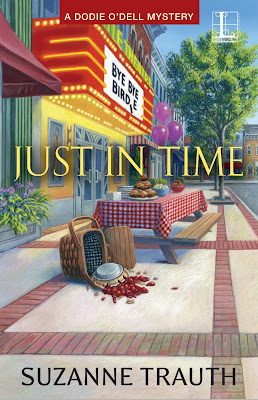 Business is humming at Dodie O'Dell's Windjammer Restaurant, where she offers theme menus connected to the Etonville Little Theatre’s amateur productions. This June, the theatre is collaborating with the neighboring Creston Players to stage Bye Bye Birdie under the stars—their first musical! There's a contest in the play to pick a fan to receive rock idol Conrad Birdie's last kiss before he ships off for the Army, so Dodie plans a contest to pick the food for a pre-show picnic.
But before the show opens, Ruby, the rehearsal accompanist, is found dead in her car. Why would anyone murder the crusty old gal who loved to sneak a smoke and a nip between wisecracks? Once again, the resourceful restaurant manager must play the part of amateur sleuth, accompanied by Police Chief Bill Thompson, who also happens to be her beau. Confronted with a chorus of suspects, she'll need to stay composed to catch the killer—or it'll be bye bye Dodie…

My Thoughts
In this story, we will follow Dodie O'Dell and her passion for her restaurant and the performance she is taking part; a muscical called Bye Bye Birdie. Of course there will be a murder involved in the story, otherwise, which will be the point for a mystery book?
Dodie can't stay away of a good mystery, but let's face the truth, having a boyfriend who is investigating the case and knowing the victim doesn't help to stay away, am I right?
It was a little bit difficult in the beginning to follow the stories, there are a lot of characters to follow and some stories between them that are not really detailed in this book. I suppose they are explained in the previous books, because this is the fourth book of the 'A Dodie O'Dell Mystery series, but you can read it as standalone.
The story is light but full of secrets and vengeance, because let me say that once you'll discover the "real" victim, you will not understand how she didn't had more enemies!
Ready to start Just In Time?

I am lucky to have a Guest Post of the Author, enjoy! ;)
Character Guest Post – Dodie O’Dell in JUST IN TIME

Summer has finally arrived in Etonville, New Jersey. The spring thaw has given way to sunny days and breezy nights with a good dose of humidity just to keep its citizens humble. I, Dodie O’Dell, manager of the Windjammer restaurant, am so happy to see the warm weather hit northern New Jersey. As a former resident of the Jersey Shore, I had become accustomed to the beach climate once Memorial Day arrived.
I’m also happy that I’ve come up with a terrific idea for my current theater-themed culinary event. I’d been promoting the Windjammer/Etonville Little Theatre connection for several years now by producing some pretty hot theme food ideas: a seafood buffet for Dames At Sea, Italian night for Romeo and Juliet, a 1940s food festival for Arsenic and Old Lace.
The Etonville Little Theatre is in rehearsal for Bye, Bye, Birdie and the show had me stumped at first. What to do with a 1960s musical about a rock star drafted by Uncle Sam, inspired by Elvis Presley’s actual army induction?
Then it hit me! In the musical, there’s a fan club competition to choose a young woman on whom Conrad Birdie would bestow one last kiss before he’s inducted into the service. Why not an Etonville contest to choose dishes to serve during the run of the show? When Etonville got wind of the contest, there was a deluge of entries. Who knew the town was so competitive?
Appetizers, salads, entrees… Henry, my boss and the Windjammer chef/owner, chose the winners, since he’ll be responsible for actually creating them. As usual, he grumbled his way through the process, but he was secretly pleased to have so many people interested in his menus.
All that remains is for the theater to get the show on the road and Henry to whip up winning entries. With the help of his new sous chef Wilson, a recent culinary institute grad, who brings a certain continental flair to the Windjammer, along with his cheerful disposition and an unfortunate habit of dropping things. Wilson is gravity-challenged…
Lola Tripper, actor, director, and reigning diva of the Etonville Little Theatre, has been my BFF since my arrival in Etonville from the Jersey Shore following the destruction of my home and place of employment during Hurricane Sandy. She scored a trifecta last month: one, she met Dale Undershot via an online dating website; two, he turned out to be a member of a theater company in Creston, the town next door to Etonville; and three, they concocted a co-production between the Etonville Little Theatre and the Creston Players that cast Lola and Dale as the romantic leads in Bye, Bye, Birdie. Sounds like a match made in heaven, right? Lola has been actively boyfriend-hunting for the past year. Dale is a good fit: charming, handsome, unattached.
Definitely a keeper. So Lola is happy, too.
Meanwhile, I’d sweet-talked Bill, my current beau and Etonville’s police chief, into taking a bit role in Bye, Bye, Birdie as …what else? A cop. I’d convinced him it was good PR for the municipal building. We’ve been discussing summer vacation plans for weeks now. I want to spend some time down the shore in August and he is itching to travel to the great outdoors in upstate New York. Camping, fishing, rafting, and generally communing with nature. I would be communing with bug spray and a bottle of wine. We had yet to come to an agreement.
Tonight I am relinquishing the Windjammer into the hands of my assistant manager Benny and stepping outdoors into the June night air. The temperature had risen to eighty today, the summer humidity like a wet blanket. A light breeze had kicked up and it felt good on my face and neck.
I climbed into my sturdy Chevy Metro, flicked the ignition switch, and backed out of my space in front of the Windjammer. I was over the moon to have an early night. A glass of  chardonnay, the latest thriller by my favorite mystery author, a speedy check of my Facebook page, and a date with my bed.
Did I point out that I’m a Gemini? My birthday is in two weeks. I’ve casually mentioned the date and a possible celebration, but Bill has yet to pick up on my hint. Without warning, the hairs on the nape of my neck are quivering. They are my radar system when something is bothering me. Is it the wind blowing in the driver’s side window? My birthday? Or something else…

Sounds interesting? Take a chance in the Giveaway! ;)
a Rafflecopter giveaway

Suzanne Trauth is a playwright, novelist, screenwriter, and nonfiction writer. Her novels in the Dodie O'Dell mystery series include Show Time, Time Out, Running out of Time, and Just in Time. Her plays include Françoise, Midwives, Rehearsing Desire, La Fonda, Three Sisters Under the Hood, iDream, supported by the National Science Foundation’s STEM initiative on science and technology, and Katrina: the K Word, based on interviews with New Orleans’ survivors of Hurricane Katrina, and produced in over a dozen venues throughout the United States. Her screenplays have won awards in competition. She is a member of Mystery Writers of America, Sisters in Crime, the Dramatists Guild, and the League of Professional Theatre Women.