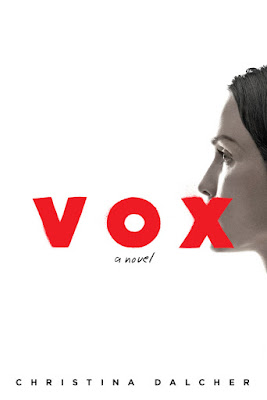 Description Of The Book
Set in an America where half the population has been silenced, VOX is the harrowing, unforgettable story of what one woman will do to protect herself and her daughter.
On the day the government decrees that women are no longer allowed more than 100 words daily, Dr. Jean McClellan is in denial--this can't happen here. Not in America. Not to her.
This is just the beginning.
Soon women can no longer hold jobs. Girls are no longer taught to read or write. Females no longer have a voice. Before, the average person spoke sixteen thousand words a day, but now women only have one hundred to make themselves heard.
But this is not the end.
For herself, her daughter, and every woman silenced, Jean will reclaim her voice.

My Thoughts
Can you imagine being prisoner of your own words?
Dr. Jean McClellan was a well known researcher and cognitive linguistic expert before everything started to change... Now she has to stay restricted at home only being able to do housework and with a shiny bracelet that counts her words... If she surpasses the 100 words a day she will receive a nice electric shock through her veins. Of course this beautiful new law is only for females of all ages, they think we should be instructed since we are born, in case we become too noisy...!


'"What won't count?" My mouth has done dry. I take another swallow of coffee, now cold.
He hand me the sheet. "Why don't you read it now while I train the device to your voice? We'll kill two birds with one stone that way."
The first words I read are in bold blue type at the top of the page:

I BELIEVE that man was created in the image and glory of God, and that woman is the glory of the man, for man was not made of woman, but woman was made from man.

I received this book only two days ago and it went directly to the top of my reading pile; after reading it I can only say it left me without words!
I was a little surprised with the name of the book, there's a parliamentary group in Spain called Vox, is Extreme Right and I think they would like the ideas that this book transmits.
I know that this book relates to a dystopian world, but lately I am seeing so much repression against the women that I am not sure if this is so far from reality. I really think there's a current worldwide of movements that control politicians but what I really don't know is which is their secret agenda!
Let me say that I really liked this book, not only for how the author created the suppressive atmosphere but how the characters feel so real and the reader feel transported inside the book.
I am a science person, so I loved the part when Jane talks about medicine and gets more technical, maybe for some readers could be a little boring, but I think it makes the book more real.
I think this is one of those books that there will be haters and lovers, nobody in between. I loved it, and as you may know the only way to know what you really think is to read it!
Do you have your own 100 words ready for today?

About The Author
Christina Dalcher earned her doctorate in theoretical linguistics from Georgetown University. She specializes in the phonetics of sound change in Italian and British dialects and has taught at universities in the United States, England, and the United Arab Emirates.
Her short stories and flash fiction appear in over one hundred journals worldwide. Recognitions include the Bath Flash Award’s Short List; nominations for The Pushcart Prize, Best of the Net, and Best Small Fictions; and multiple other awards. She teaches flash fiction as a member of the faculty at The Muse Writers Center in Norfolk, Virginia. Laura Bradford of Bradford Literary Agency represents Dalcher’s novels.
After spending several years abroad, most recently in Sri Lanka, Dalcher and her husband now split their time between the American South and Naples, Italy.
Her debut novel, VOX, will be published in August 2018 by Berkley (an imprint of Penguin Random House).