The Spook In The Stacks by Eva Gates - Blog Tour + Guest Post + Giveaway!

Description Of The Book 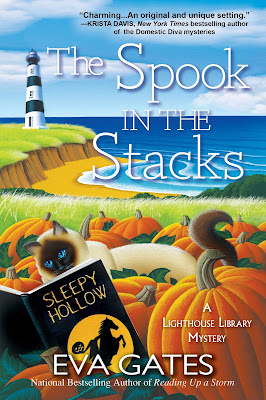 Halloween in North Carolina’s Outer Banks becomes seriously tricky when librarian Lucy Richardson stumbles across something extra unusual in the rare books section: a dead body.
Wealthy businessman Jay Ruddle is considering donating his extensive collection of North Carolina historical documents to the Bodie Island Lighthouse Library, but the competition for the collection is fierce. Unfortunately, while the library is hosting a lecture on ghostly legends, Jay becomes one of the dearly departed in the rare books section. Now, it’s up to Lucy Richardson and her fellow librarians to bone up on their detective skills and discover who is responsible for this wicked Halloween homicide.
Meanwhile, very strange things are happening at the library―haunted horses are materializing in the marsh, the lights seem to have an eerie life of their own, and the tiny crew of a model ship appears to move around when no one is watching. Is Lucy at her wit’s end? Or can it be that the Bodie Island Lighthouse really is haunted?
With The Legend of Sleepy Hollow on everyone’s minds and ghoulish gossip on everyone’s lips, Lucy will need to separate the clues from the boos if she wants to crack this case without losing her head in The Spook in the Stacks, the delightful fourth in national bestseller Eva Gates’ Lighthouse Library mysteries.

My Thoughts
At the Rhode Island Lighthouse there's a special library, from time to time a murder happens there... Lucky for them, they have the noisy Lucy Richardson that always tries to help the police investigating these crimes. In this book the victim will be a millionaire that wanted to leave her old books and manuscripts as a legacy to the Lighthouse library before appearing dead... Who would want to kill him?


'"It is something to consider," she said slowly. "There might be spirits at work here who've been forgotten. Such as the woman who died back in the 1990s."
"Bertie says that story isn't true."
"Which proves my point. She's been forgotten." Louise Jane picked up the little captain and studied him. "I wonder what stories you can tell, my friend. What do you see when the lights are out and silence descends? Even if no one lingers in the lighthouse who knew Jay, personally or by reputation, when they were living, some of the old ones might have sensed he was not a friend of the Outer Banks."'

Lucy Richardson works and lives at the lighthouse; of course she loves mystery, so when Jay appears dead and his nice niece seems to be the main suspect, she can not stay away to investigate what has really happened and who had a motive to kill him. He was not a loved man but no one seem to have a strong motive to kill him apart from his niece... Is she really a murderer and Lucy is too naïve to believe it?
This story not only has a mystery, but some love and some "strange" appearances... Is Lucy really seeing ghosts or someone is trying to play with her?
I liked the story and the characters of this book, it had been a nice read, with not a clear suspect till the end and a nice view of the life at the library. Lucy is a nice woman, doesn't seem to be scared easily but is ready to fight for her friends in needing moments. We will learn a little too about Lucy's love live, she is not quite sure of what does she want in the future, she loves her boyfriend but lately it seems he doesn't have enough time for her... I am not sure if they have a future together, but love can fight anything, am I right?
This is the fourth book of the Lighthouse Library Mystery, but you can read it as standalone.
Ready to believe in ghosts?

Ghost Stories - Guest Post
My Lighthouse Library series from Crooked Lane is set in the Outer Banks of North Carolina. When I began the series (with By Book or By Crook) it wasn’t a place I was very familiar with, so I set about getting to know it. I’ve fallen in love with the fabulous beaches, the great restaurants, the marvellous lighthouses, and the miles and miles of wild seashore.
As the Lighthouse Library books are set in a real place – the Outer Banks – in general and a very real building – The Bodie Island Lighthouse – in particular, it’s been important to me to get as much of it right in the books as I can.
Yes, I am well aware that the actual lighthouse isn’t a library and it isn’t exactly big enough to house one, plus assorted offices, hallways, staff rooms, book shelves, meeting rooms, and even a small apartment, but I have enjoyed keeping the exterior of the building and the grounds as true-to-life as possible.
With one exception: the ghost stories. I have deliberately not read a single book about ghost stories or paranormal legends of the area, and there are many.
Not because I’m either squeamish or the nervous sort, but because it’s much more fun to make up my own.
Lucy Richardson’s nemesis, Louise Jane McKaughnan, wants her to believe there are ghosts in the old building, hoping to scare Lucy out of her library job and back to Boston. Louise Jane considers herself to be one of a long line of women with special sensitivity to the supernatural. Lucy is never quite sure whether Louise Jane is telling stories she’s heard, or just making up what she thinks will scare Lucy the most.
But practical, down-to-earth Lucy, steadfastly refuses to believe in Louise Jane’s stories or let herself be spooked. And Lucy has never experienced the slightest sense of anything supernatural in the lighthouse.
Until… The fourth book in the series, The Spook in the Stacks, is set over Halloween.
The night when the veil between the worlds is at this thinnest. And Lucy begins to see things. A ghostly horse watching her from the edges of the marsh. Coloured lights luring her forward. And are the tiny skeletal figures of the model ghost ship moving?
Lucy doesn’t know what to believe. All she knows is that no one else, not even Louise Jane or Charles the library cat, is seeing the things she’s seeing.
Is she losing her mind? Has she been influenced by the Bodie Island Classic Novel Reading Club’s most recent selection: The Legend of Sleepy Hollow and Bracebridge Hall by Washington Irving?
Or is something really out there?
Find out in The Spook in the Stacks, the fourth Lighthouse Library mystery. 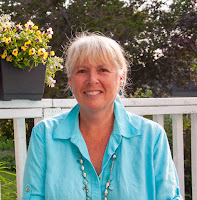 Eva Gates  is the author of the Lighthouse Library cozy series from Penguin Obsidian, set in a historic lighthouse on the Outer Banks of North Carolina, featuring Boston-transplant librarian, and highly reluctant sleuth, Lucy Richardson. The first in the series, By Book or By Crook, was released in February 2015. Eva is the pen name of bestselling author Vicki Delany, one of Canada’s most prolific and varied crime writers.


Sounds interesting? Good luck in the Giveaway! ;)
a Rafflecopter giveaway