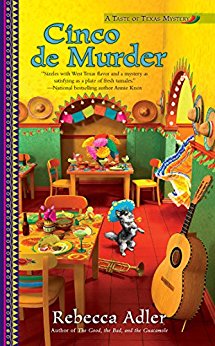 While we enjoy a new adventure of our favourite waitress Josie Callahan, we will have to discover another killer, this time Josie's uncle will be the one accused of murder... really this family should have to think about moving... every time there's a murder they are the first suspects!
It was quite funny having the pet character Lenny, that had more presence than a simple human, everytime anyone spoke he answered with little 'yips'. It was so human that maybe next time he will be the next suspect...! ;)
I liked how in this book, Josie and the Detective Lightfoot work more or less together, he doesn't simply dismiss her ideas, but take a closer look at her thoughts and discoveries. Makes the book more interesting, and let me say the truth, not seeing the police as something completely useless.
This had been a quick and intriguing read, making us wonder in the end what will happen in the next story and wanting to know more about the characters on the previous book. Even though this is the third book of the series "A Taste of Texas Mystery" you can read it as standalone.
Don't forget that in the end there are some really delicious recipes that are waiting for you to try!
Ready for a mouthwatering murder?

Interested? Good luck in the Giveaway!
a Rafflecopter giveaway

Here is a little excerpt to make you read it right now!
Chapter 1
Folklórico Rehearsal