Survival Of The Fritters by Ginger Bolton - Blog Tour + Giveaway! 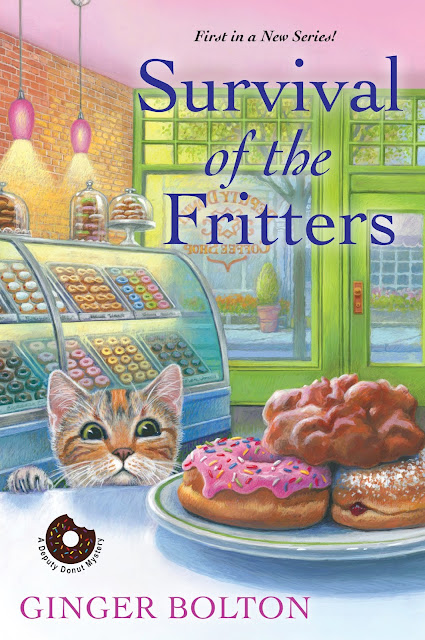 Emily Westhill knows her regulars, so when she finds her sweet friend Georgia Treetor dead, she can not stay without doing anything to find the killer, of course it would not be so easy...


'"Bring the cake outside." I slung the towel around my neck and gathered cutlery, plates, napkins, and a candle. Outside, I gave Brent the towel, set the almost-dry patio table, and lit the candle.
The cake looked almost as fudgy as the icing. Lois cut it in generous slices. We sat down, and Brent wrapped the towel around his lower legs. "I hope no one wants me to jump up and chase a criminal", he deadpanned.
I gave him a fake serious look. "You'll be surprised how quickly I can whip that towel away."'

A mystery book with cats and donuts involved always sounds great, imagine if the main character is sharp, bold and has a big heart, we can not ask for anything else!
This is a quite complicated case, because it's not only that one of Emily's best clients had been murdered, but Emily's husband was killed in the searching for the killer of an old case... and both of them seem to be mixed. So this would be personal for Emily, she has to catch the killer to keep her husband's memory, and maybe start living again?
Emily will have the help of her old friend Brent, a detective. They have some past together but maybe it’s the moment to make a step further? Time will tell...
This had been a a quick and interesting read, this is the first book of the Deputy Donut Mystery, but I am sure we will read more about these lovely characters and the delicious recipes at the end of the book will help us to be entertained while we wait for the next novel!

Interested? Good Luck In the Giveaway!
a Rafflecopter giveaway

And I am luck to share a Guest Post from the author with you, enjoy! ;)
WHILE IT’S HOT by Emily Westhill from SURVIVAL OF THE FRITTERS by Ginger Bolton

The laughter coming from one of the big tables beside the front windows of Deputy Donut wasn’t unusual. The retired ladies who called themselves the Knitpickers and spent weekday mornings in our coffee shop were nearly always laughing.
What was unusual was the glum silence of the retired men at the other large table, just across our shop’s central aisle from the women. Most days, the men were also laughing, and often teasing the women, who teased them right back.
Coffee carafe in hand, I hurried to the men’s table and refilled mugs “Is anything wrong?” I asked them.
“Why?” one demanded.
“You’re so quiet.”
Finally, they laughed. “We don’t have to talk all the time, Emily,” one said.
The Knitpickers were still giggling. I went over to their table. One woman was cradling her mug between her hands.
The others grinned at her. “It’s like she’s afraid we’re going to take her coffee away.”
She pretended to be affronted. “I’m warming my hands.” She lifted the mug and drank about half of her coffee.
“See?” one of the others said. “She always gulps it down like that, while the rest of us sip at ours, savor it, and make it last. She must be certain we’re going to steal her coffee.”
The woman smiled and drank the rest of the coffee. “I raised six kids,” she explained. “Do you know what babies are told before they’re born?”
One woman rubbed her tummy and chanted, “I love you, I love you, I love you?”
The mother of six shot her an appreciative look. “We tell them that, but the universe tells them to never let their mothers finish a meal while it’s hot. And coffee? Are you kidding? I drank mine cold, if I got any at all, for over twenty years. I’m making up for that now.”
One of the women beckoned me closer. “Don’t look now, but did you notice that man in the back corner?”
I nodded. I’d taken him an espresso a few minutes before. He was tall with gray hair and smile wrinkles at the corners of his eyes. He’d spent the entire time he’d been inside Deputy Donut looking at his phone.
“Do you know who he is?” the woman asked. “Has he been here before?”
“No, and no,” I answered.
“Could he be Dorn Yule?”
“Who’s Dorn Yule?”
My innocent question caused a flurry of indignation. “She doesn’t know who Dorn Yule is!”
“How old are you, Emily?” they asked.
“Nearly thirty.”
They nodded. One said, “That explains it. You’re too young. Dorn was raised here in Fallingbrook, but he left here in the seventies for Hollywood. He was a big star. And we’ve been ogling him.” Giggling at him, too, it seemed. “He was looking absolutely swoony over his espresso, then he chugged it.”
The mother of six placed her right hand over her heart. “He and I obviously have a lot in common.”
Her Knitpicker friends giggled.
The retired men darted accusing looks at the man who had gulped down his espresso. Aha, I thought. They’re jealous because the Knitpickers are paying attention to someone besides them.
The distinguished gray-haired man got up and sauntered outside. Looking rather swoony themselves, the Knitpickers watched him leave.
The retired men watched the Knitpickers.
Before long, the two groups of retired people were teasing each other and laughing again.
I never saw the distinguished gray-haired man again. Whoever he was, he left a fabulous tip.