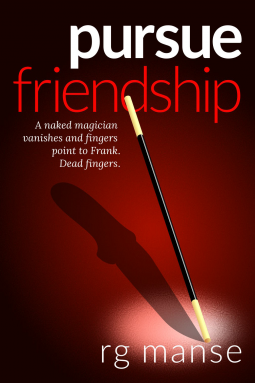 This is a book of contradictions... Is the killer a poor innocent man? Is the missing magician a master mind killer? Is there really a murderer?
When you start reading this book, it seems that Franks is a man with bad luck who just wants to return with his wife, Irene. But Irene has a new boyfriend, Findlay, who is the friend of the magician Marek, who at the same time works at the cafe with Frank. Marek also works with Katrina, a gangster ex-girlfriend... Does it seem complicated enough? Be prepared, this is just the beginning!

'Calling Annie was one step too far. But Frank did manage to force himself to send her a text, about an hour before the Mowdown was due to start. The moment he hit send, he hoped she'd be shopping for potpourri or knick-knacks and wouldn't get it in time. The phone beep-beeped and vibrated before he'd put it back in his pocket:
Love to! xx
Man. Two kisses already. The woman was a nymphomaniac.

It was strange reading this book at the beginning, every chapter is a different character, sharing their thoughts and old memories. But when you enter to the story, you just want to know the truth beneath all the lies and the half-trues. Everything makes Frank a killer, his past too, but is it all true?
This is the second book of Frank Friendship Series, so Frank will have to deal with a lot of troubles for a long time... but I hope with less explicit scenes and a little bit of happiness in his life.
R.G. Manse has written a web of intrigue, where you are stick on it like a fly, waiting to be devoured... Ready for the show?