The Kill by Jane Casey 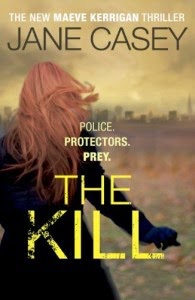 Maeve Kerrigan, a junior investigator at London's police didn't thought that the wedding she was invited would be the chance to laugh and joy she would have for a long time. Because troubles never stop and as a detective she must resolve the murders, considering that now the target is the law enforcement. She will have to deal with the cynicism of her partner Josh Derwent and with the rumours of her "possible" affair with her boss. Would she had enough energy to deal with all of them or will she be the next prey?

"He frowned. 'She made me think we might not be dealing with a pro after all'
'Why not?'
'The second shot bothers me. There was no need for it. He should have known he'd got a kill with the first. And it was too quick. More like he wanted to shoot him than that he had to do it.'
'Maybe he thought one shot wasn't enough to kill him.'
Derwent shook his head, slowly. 'Maybe one shot wasn't enough because he wanted him to die twice.'

This is the fifth book of the Maeve Kerrigan saga, but if you haven't read anything of Jane Casey, it's a good book to start.
This is a good crime book, you will be fascinated about the story and the characters during all the book. It has some panic moments and of course mixed feelings, but it's a worthwhile read.
Obviously, there are some situations in the book where I would not react like Maeve; Josh Derwent is a misogynist and need someone to make him stop his verbal abuse against women. Maeve allow all his comments and tries to exonerate his behaviour; that annoys me but she is so tender and understanding that at the end you forget Derwent's behaviour.
Being a woman in the law enforcement seems that is still not widely accepted within men, would it ever be? If you are good at your work, why there are always rumours that you had won it because you are sleeping with your boss?
It's sad that women's achievements are always questioned. When it will end the men mandate?