The Prediction by Darren Sugrue 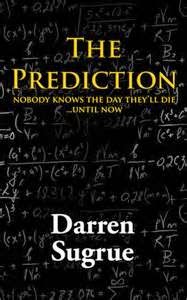 Would you like to know the date of your death?
Twelve years ago, a mathematical genius, Daniel Geller, created a formula to predict the date of a person's death, but the university rejected his thesis. After all these years, his old teacher, John Redmond, visits him with the surprising news that maybe the deaths he predicted were correct. This makes him deciding to prevent the next victim, but he only has 6 days to save his ex-lover.
Would he predicted correctly the date or would he be able to save Grace's life?
Grace had decided to leave his abusive husband after some years of marriage, now she has to decide what to do with her life, but seeing Daniel after so long it reopens some unfinished feelings... Would one night be enough for them to close all the old wounds and prevent Grace's death?
John is loosing his wife with the alcohol and decides to try Daniel's formula with her. Would she die alone or would it be better to die together?
I would like to thanks Darren Sugrue for letting me read his book, I love it!

This book has two parallel stories, the reunion of two ex-lovers after 12 years of separation and  how two parents try to accept the tragic death of his son.
It's not easy to finding a book that leaves you satisfied and happy when you finished, but The Prediction has all the ingredients to be a good thriller and enjoy every page of it.
I recommend you to read this book, you will not be able to put it down!
So... are you ready to discover the day of your death?